Solid fuel-related fires in that year accounted for 11.2 percent of all residential fires and 51 percent of all fires attributable to heating equipment problems.

Chimney connectors were reported as the cause of 5 percent (3,000) of all solid fuel-related fires in 1989.

Fireplaces accounted for 17 percent (9,600) of all solid fuel-related fires.

Property damage loss caused by fires originating in chimney and chimney connectors in 1989 and total property loss was set at $81.6 million.

In addition, 6,000 residential fires were attributed to chimneys and chimney connectors serving heating systems burning liquid and other fuels. These fires caused $24.9 million in property damage.

These statistics do not reflect carbon-monoxide-induced deaths or illness caused by blocked, damage or deteriorated chimney systems.

The data contained in this report has been excerpted from a memorandum released by the U.S. Consumer Product Safety Commission on January 8, 1992. The subject of the memorandum is "1989" Residential Fire Loss Estimates."

It is important to have your chimney inspected and cleaned at least once a year by a qualified sweep.

Cleaning also removes dangerous creosote deposits that can build up in your chimney. These deposits can potentially ignite causing damage to your chimney and possibly your home.

Chimney Video Inspections
For a complete evaluation of your chimney's flue- a video inspection is the answer. If you are buying a home, have had a chimney fire in your home or are unsure of the condition of your fireplace flue or heater flue let us do a video inspection to evaluate it.
Chimney Certifications
Whether you are selling your home, renting your home or need a chimney certification for a new heating appliance call us!!
Dryer Vent Sweeping
Just like your chimney, your dryer vent can get clogged by regular usage. We clean it to make it safer and more efficient. After cleaning, your dryer doesn't have to work as hard to get rid of the lint.
Chimney Relining
There are several different types of chimney relining (Stainless Steel or Cerfractory)) . If you are in need of chimney relining call us and we can guide you towards the best soluation for you and your home.
We Install Chimney Caps

The best way to prevent moisture from rain and snow, animals, leaves, and other debris from entering your chimney is to install a chimney cap. 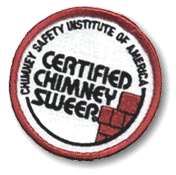